NuggetRoyale.io is an online multiplayer io game that is made by Pelican Party Studios. In the game, you play as a chicken and battle other players. After each match has only one winner. Will you get the win in this battle and become a chicken king? Join this game, surely you will have interesting experiences.
Entering the game, you will fight against other players in battle royale style. There are 80 different players from all over the world present in this battle. You will fight with one of them. You will use a few moves such as walking, sprinting, jumping and dashing for your battle. Besides, you need to eat a lot of corn to be bigger and you will easily push other players out of the battle. If you are a final player in the battle that you will get the highest score bonus and you are also king of the chickens. Now, Let's get NuggetRoyale.io game from Paperio.org site to start for your battle, it's free! Good luck and have fun!

- When you are at the smallest size, you do have some jumping advantages.
- Collect as much corn as possible
- Be the last to stand in battle

Use WASD to move
Space bar to jump and double click to jump.
Hold to aim and release to charge 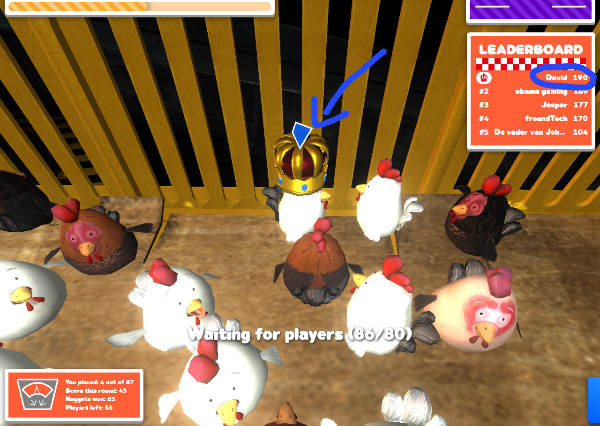